Electromagnetic Bioeffects Blog - A recent article in The Scientist: Magazine of the Life Sciences listed the top five science scandals of 2011 (science scandals). (...) These five obscure instances are what a big-time science journal considered the premier ethical lapses in science during 2011. But these cases of fraud, falsification, and plagiarism, if that’s what they were, probably affected only a few hundred people at most—the rest of the ten billion people on earth were unaffected. For this reason, the magazine article seriously trivialized the concept of ethical misconduct in science. Meaningful misconduct hurts people, and a scientist should hurt a lot of people to qualify for a top-five ranking. By this standard, my candidates for the top five science scandals of 2011 involved publications by Leeka Kheifets, James Rubin, Michael Repacholi, Joe Elder, and Mays Swicord. Articles they published in 2011, which were continuations of their life work, directly and materially contributed to the occurrence of cancer and other dreadful diseases in many million men, women, and children.

Leeka Kheifets, of UCLA, published papers in which she argued against the existence of health risks due to exposure to environmental EMFs (magnetic fields and cell phones). As she has done many times throughout her career, she employed the ambiguities and uncertainties inherent in the methods of epidemiology as shields to deflect attention away from the realization and recognition that environmental EMFs are major determinants of human disease. She has lobbied continuously since the late 1980s on behalf of her clients, particularly the Electric Power Research Institute which named her one of its top scientists and heavily supported her financially. Her investigations have consistently been badly designed, poorly reasoned, and inarticulately expressed. Her attractiveness to EPRI and her other clients has not been her brains, but her consistency. When someone says the same thing in public and quasi-public forums over and over for more than two decades, there is a tendency on the part of some people to accept the rhetoric irrespective of analysis. She is a bad scientist who knows or should know that she grossly misleads people, tricking them into causing their own cancers. She was a one-woman super-PAC before super-PACs became popular.

James Rubin, King’s College London published a blindingly biased paper in which he argued that there was no such thing as electromagnetic hypersensitivity (no robust evidence). His numerous studies on electromagnetic hypersensitivity are all negative, but that negativity was manufactured by employing experimental designs and statistical analysis that were virtually guaranteed to produce negative results. By means of jaundiced analyses he comes to the conclusion that EHS sufferers have a purely psychosomatic disease, a viewpoint that has untold benefits for his clients and funders, particularly the cell-phone companies.

His work is a scientific Ponzi scheme in which he gets money from the phone industry effectively by promising negative results, creates and publishes such results, and is then rewarded by the industry with even more funds, like petting a trained dog. The natural consequence of his work is to stigmatize EHS sufferers as neurotics who need the care of a psychiatrist, not an internist or allergist. Rubin is almost a perfect example of a scandalous scientist in a scandalous system that consists of cell-phone companies having enough money to buy any results they want, dependable trained dogs who produce the desired results, and scientific journals such as Bioelectromagnetics that publish the results without properly vetting them, and without insistence on simultaneous publication of conflict-of-interest statements.

Next we have Joe Elder and Mays Swicord, who come as a matched set because of their long career of cooperation in an effort that has at its natural consequence the worldwide increase in human disease. Elder began his career in EMFs working for the U.S. Environmental Protection Agency and Swicord began working for the U.S. Food and Drug Administration. After a few years they went over to the dark side and began working for EMF-producing companies, tasked not to do EMF research, but to lobby governments in favor of the safety of environmental EMFs. The fraud they sought to and succeeded in establishing—a two-headed abomination—is so pervasive and pregnant in society that it’s hardly recognized, but rather remains hidden in plain sight. First they argued, in effect, that it was scientifically and ethically acceptable to perform involuntary human experimentation. That is, to expose human beings to cell-phone EMFs and determine the nature and extent of their health impacts by counting the dead bodies. Second, they popularized the notion that what is or is not safe should be determined by a committee of experts wherein economic interests are represented by the sharpest minds on that side, and all other stakeholders in the issues are unrepresented. The fruits of the labor of Elder and Swicord are on display in an article published in Lancet Oncology in 2011. The article is intrinsically heinous because it is based on the proposition that involuntary human experimentation is acceptable. The article is also ethically corrupt from a procedural perspective because the administrative organization, staffing, research design, and funding were all controlled by the industries whose activities were putatively under investigation. It simply doesn’t matter what the authors (there were 60 of them) had to say, or that a handful of them were intellectually honest and not industry sycophants like Elder and Swicord. Value-laden conclusions and judgments of any non-representational EMF committee are worthless, whether they are positive, negative, or neutral. The reasoning would be important, but such committees are invariably devoid of reasoning because they operate by consensus, which is more affective than rational.

The best of the worst is Michael Repacholi. In 1996 the World Health Organization began what it said was a project to assess the scientific evidence of possible health effects of EMFs. But the project was corrupted from the start because it was controlled by the power- and cell-phone companies in the industrialized countries. The companies designated Michael Repacholi as the project head. For many years he had been a consultant and spokesman for power companies, so it was unrealistic to expect he would conduct an open and honest inquiry. But his performance in office was even more miserable than could have been anticipated based on what had been known about his personal opinions when he was appointed.

During the time he headed the EMF project at WHO, Repacholi dealt almost exclusively with experts on the payroll of cell-phone and power companies. He produced a series of reports and evaluations that exonerated these industries from any responsibility for human disease produced by the EMFs they generated and dispersed into the environment. Scientists who disagreed with the viewpoint of the EMF companies were systematically excluded from the WHO EMF adjudicatory process. The general public, a major stakeholder in the EMF debate, had no representation at the table when Repocholi’s committees broadly sanctioned widespread EMF exposure. Instead, the WHO scientific reviews of EMFs were star-chamber processes in which only pro-industry spokesmen were heard, and the results of the processes were foreordained. 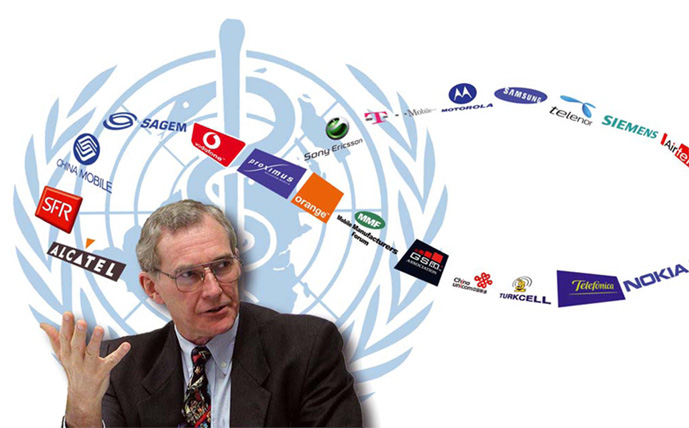 Repacholi gave many speeches but was never held accountable in any serious dialogue or debate, and was never required to justify his extreme positions. He invariably appeared in forums that were friendly to his mission, and under conditions that insulated him from the necessity for reasoned discussion. Using his bully pulpit at WHO, he encouraged human beings, including young children, to chronically irradiate their brains with EMFs by falsely proclaiming that they were safe. 2011 was no different (cell phones safe). He bears direct personal responsibility for many cases of human disease.

If you want to see examples of scandals in science—true scandals, not cases akin to the number of angels that can fit on the tip of a pin—look at the life work of Kiefets, Rubin, Elder, Swicord, and Repacholi.