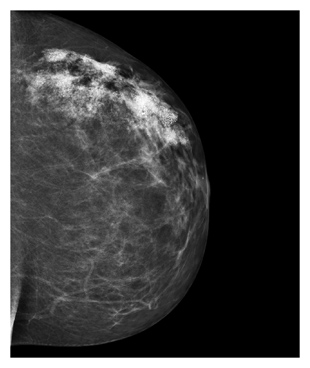 Could a warning make a difference?

Dr. John West, director of surgery at the Breastlink medical practice in Orange County, California, has seen a number of  cases that have convinced him there's a connection between cellphone  radiation and breast cancer.

One of those patients is Shea Hartman  of Lake Elsinore, California, who was diagnosed with invasive breast  cancer in 2012 when she was just 21 years old.

To be precise, the calcifications  of the malignant tumor on her left breast formed a rectangular shape  measuring 3.5 by 9.5 centimeters, remarkably similar in shape and size  to her Samsung Alias cellphone.

"From 8th grade on, I would put my  phone in my left bra," Hartman told CBS News. "I mostly did it during  school and while I was at work because I didn't want to miss phone  calls."

Tiffany Frantz of Strasburg, Pennsylvania, was also diagnosed with invasive breast cancer at the age of 21.

In 2013, West and five colleagues published a case study of four women,  including Shea and Tiffany, who had been diagnosed with multifocal  invasive breast cancer under the age of 40 after routinely storing their  cellphones in their bras. None of the patients had a family history of  breast cancer, and they all tested negative for BRCA1 and BRCA2 gene  mutations, which are linked to about 10 percent of breast cancer cases.

These  incidents brought forth "the possibility of a relationship between  prolonged direct skin contact with cellular phones and the development  of breast cancer," the study noted, though it stopped short of  establishing proof.

Other experts caution against jumping to  conclusions. "Because breast cancer is an uncommon and tragic occurrence  among young women, these cases have received significant attention on  television and on the Internet," wrote Dr. Ted Gansler of the American  Cancer Society. He warns against reading too much into this small number  of very unusual cases: "We don't hear about the millions of women and  men who carry phones close to various organs and still remain healthy,"  he said.

Dr. David Gorski, a surgical oncologist specializing in  breast cancer surgery in Detroit, MI, says we naturally crave  explanations when bad things happen, "particularly if it is something as  unusual as such a young woman developing breast cancer, and as a result  we all tend to look for causes, whether those causes are supportable by  science or not."

West's research team has compiled data on at  least 32 women in the U.S. who believe their breast cancers came from  tucking their phones in their bras.

The numbers may seem slim, but West  believes "they represent the tip of the iceberg." He believes young  women are biologically more vulnerable because the breast is a  developing organ, and "I can no longer discount what I have observed."

Tiffany's  mother, Traci Frantz, believes a straightforward and visible warning  label on her daughter's phone could have made a difference. "Had there  been a statement on the outside of the box stating what is already  stated within the owner's manual about keeping cellphones away from  direct contact with the skin, we could have taken precautions to make  sure her cellphone was kept in a safe place off her body," she said.