Addicted to IT? You have nomophobia and could be damaging your health 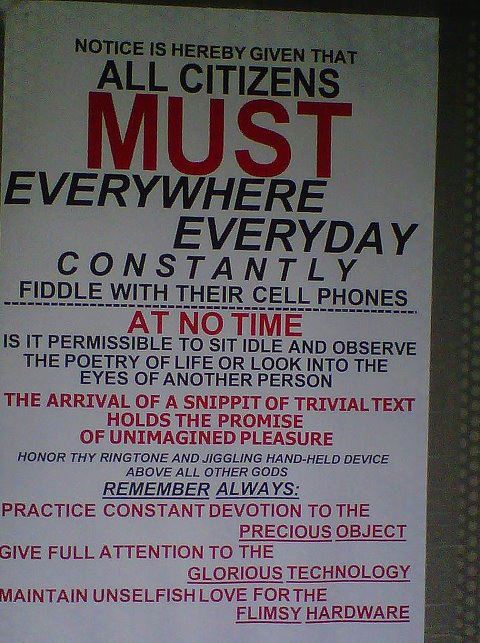 The National - The urge to log onto to social networking sites or constantly check email can be a stronger compulsion than the desire to take drugs or drink alcohol.

The combination of Facebook and internet-connected smartphones can be highly addictive, outstripping even addictive drugs such as alcohol and tobacco, according to IT industry research.

In addition to smartphones' alleged addictive qualities, too much screen time can also cause mental and physical health problems. Aside from well-documented everyday conditions such as "text neck and "iPad shoulder", there are more serious consequences of the IT industry's having fulfilled its 20-year old promise of delivering anything, anywhere, anytime.

Shin Dong-won, professor of psychiatry at South Korea's Kangbuk Samsung Hospital, says the stimulation from smartphones doesn't go through the frontal brain lobe, which processes information, but induces direct mental and physical reactions. He therefore believes that smartphones can interfere with children's normal development during a time when they should be learning patience.

Despite consistent denials from mobile phone makers, there is also a growing list of other health risks associated with increased smartphone usage, including a potential increase in cancer caused by low but rising levels of radiation generated by smartphones and the wireless networks fuelling them.

In 2011, the International Agency for Research on Cancer, classified mobile phone radiation as possibly carcinogenic and recommend additional research into the long-term, heavy use of mobile phones. According to The Ecologist magazine, studies also suggest that our increasing addiction to smartphones may also be causing long-term ecological damage. For example, a Colorado researcher Katie Haggerty planted test plots of aspen seeds and shielded some from the RF radiation from a nearby town's mobile phone masts. The difference, recorded by the International Journal of Forestry Research, was that those seeds protected from the RF radiation grew into healthy saplings while the exposed plants were small, lacked pigments, and had sickly leaves.

The Ecologist also reports that in Switzerland, the University of Zurich's Michael Hässig recorded multiple cataracts in calves near mobile phone masts, while a Belgian researcher Joris Everaert of the Research Institute for Nature and Forest (INBO) mapped striking declines in house sparrows in mobile phone masts' main fields.

But while the IT industry jury may still be out on the long-term health and environmental consequences of such a new technology, there is little doubt we may be spending too much of our time hooked up to it. Last year, a team headed by Wilhelm Hofmann, a behavioural psychologist at Chicago University's Booth Business School, published the results of an experiment, using BlackBerry smartphones, once named "CrackBerry" phones because of their alleged addictive properties, to gauge the willpower of 205 people aged between 18 and 85 in and around the German city of Wurtzburg.

The study found that, aside from sleep and sex, the urge to log into social networking sites is stronger than any other, including drugs and alcohol. The study found that while a compulsion for logging onto Facebook appears to be less physically harmful than, say cigarettes or alcohol, it still becomes an addiction that "steals" many people's time.

Mobile phone addiction now has a name "nomophobia". The first treatment and a facility for dealing with the condition in southern California, the Morningside Recovery Center in Newport Beach, has opened its doors to self-confessed mobile phone addicts. Doctors believe that needing "anything" to feel at ease or normal is technically a disability. The symptoms of nomophobia are generally recognised to include an inability to ever turn the phone off, obsessive checking for missed calls, emails and constantly topping up the power-hungry smartphone battery.

According to research from the United Kingdom-based mobile phone security company SecurEnvoy, 77 per cent of 18-24-year-olds suffer from nomophobia. The study showed that people on average check their phone 34 times a day, and 75 per cent take the phone to the bathroom. SecurEnvoy's first study, conducted four years ago, revealed that 53 per cent of people suffered from nomophobia. Earlier research in the United States among smartphone users in their late teens and twenties revealed that smartphones and iPads produce roughly the same withdrawal symptoms as addictive drugs such as heroin.

"Addiction has a compulsive aspect that drives it, if you can break the compulsion (I have to respond 'Right now!') you can generally control addiction … Voluntarily walking away from the technology regularly reinforces that nothing bad will happen if you do," says the Silicon Valley analyst Rob Enderle.

But he adds that there is little prospect of mobile internet usage declining in the foreseeable future.

"We are creatures of habit and these habits are being deeply set through repetition. If these services improve their reward structures ... we will be even more tightly tied to them," says Mr Enderle.