Electrosensitivity in individual cows too

A study on the reaction of enzymes in cows near mobile phone masts shows that some cows are more sensitive than others, as with humans (Hässig M et al, BMC Vet Res., 2014). It did not say whether sensitive cows read newspaper reports or had ‘awareness
exposure’, as some psychologists and the ICNIRP chairman argue for humans. A recent study confirmed that, similarly, a small group of workers show greater sensitivity and typical ES symptoms in MRI magnetic fields. 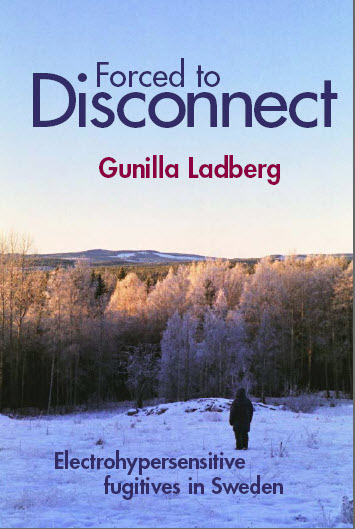 "The European Economic and Social Committee (EESC) has held a public hearing on electromagnetic hypersensitivity (EHS/ES) on 4th November 2014, attended by about 50 people, followed by a working group meeting in the afternoon to decide on how best to move forward on the EHS issue. The idea of the hearing was apparently their own, submitted by Bernardo Hernández Bataller. The group think the European Commission should pay more attention to this issue."

Jamaica - IF TWO years ago this young lad, who lived for computers and application creation, was told he would become extremely sick from being around everyday gadgets, Wi-Fi and cell towers, he probably would have had a hearty laugh and thought, 'oh, that's a good one' . But what he may have thought was a joke, is now his reality.

Twenty-one-year-old Joel Dean, a trained software engineer, had to move from urban living nine months ago to being ensconced in a hut by the river after being diagnosed with electrical sensitivity. Electrical sensitivity is as an extreme allergic reaction to electromagnetic forces from mobile phones, computers and other wireless appliances. One may experience symptoms of headaches, burning or tingling sensation in the face or body and a rash while in the presence of these gadgets.

Dean first noticed this allergic reaction to technology last year after borrowing a 4G modem from a friend and fell asleep with it on. He woke up with unusual tingling sensations on his skin. He immediately researched the symptoms online.

Via Parents against WiFi in schools: The Los Angeles Public School District (LAUSD) has officially accommodated a teacher who is sensitive to WiFi. The LAUSD is the second largest public school district in the US.

From the attached letter:
"The Committee reconvened September 9, 2014. After reviewing and taking into consideration all of the documentation you submitted as part of your request, the information you presented during the meeting, and reviewing alternate accommodations, the Committee approved your request to have the Wi-Fi turned off in your classroom during the 2014-2015 school year. As an alternate accommodation, the Committee also approved a reassignment to a different school site where Wi-Fi has yet to be installed."

Bruce Evans is man on a mission. And he is looking for other people with Electromagnetic Hypersensitivity to join him in creating an EHS refuge in southeast Australia, on land outside of Wangaratta, Victoria in the King Valley.

The land is available for occupancy right now for anyone who can come with a van, tent or caravan. Those who arrive first may be able to have one of the bedrooms in Bruce’s cottage.

People who want to visit the land for a temporary “holiday” from wireless radiation are welcome. But Bruce is also looking for electrosensitive people who want to stay long-term, build their own cottages on his family’s land, participate in the farm and help create a community safe from electropollution.

Could myelin damage from radiofrequency electromagnetic field exposure help explain the functional impairment electrohypersensitivity? A review of the evidence

Abstract - Myelin provides the electrical insulation for the central and peripheral nervous system and develops rapidly in the first years of life, but continues into mid-life or later. Myelin integrity is vital to healthy nervous system development and functioning. This review outlines the development of myelin through life, and then considers the evidence for an association between myelin integrity and exposure to low-intensity radiofrequency electromagnetic fields (RF-EMFs) typical in the modern world. In RF-EMF peer-reviewed literature examining relevant impacts such as myelin sheath, multiple sclerosis, and other myelin-related diseases, cellular examination was included.

There are surprisingly little data available in each area, but considered together a picture begins to emerge in RF-EMF-exposed cases: (1) significant morphological lesions in the myelin sheath of rats; (2) a greater risk of multiple sclerosis in a study subgroup; (3) effects in proteins related to myelin production; and (4) physical symptoms in individuals with functional impairment electrohypersensitivity, many of which are the same as if myelin were affected by RF-EMF exposure, giving rise to symptoms of demyelination.

In the latter, there are exceptions; headache is common only in electrohypersensitivity, while ataxia is typical of demyelination but infrequently found in the former group. Overall, evidence from in vivo and in vitro and epidemiological studies suggests an association between RF-EMF exposure and either myelin deterioration or a direct impact on neuronal conduction, which may account for many electrohypersensitivity symptoms.

Odor and Noise Intolerance in Persons with Self-Reported Electromagnetic Hypersensitivity

Lack of confirmation of symptoms attributed to electromagnetic fields (EMF) and triggered by EMF exposure has highlighted the role of individual factors. Prior observations indicate intolerance to other types of environmental exposures among persons with electromagnetic hypersensitivity (EHS). This study assessed differences in odor and noise intolerance between persons with EHS and healthy controls by use of subscales and global measures of the Chemical Sensitivity Scale (CSS) and the Noise Sensitivity Scale (NSS). The EHS group scored significantly higher than the controls on all CSS and NSS scales. Correlation coefficients between CSS and NSS scores ranged from 0.60 to 0.65 across measures. The findings suggest an association between EHS and odor and noise intolerance, encouraging further investigation of individual factors for understanding EMF-related symptoms.

Interview with Dr. Dominique Belpomme by Radio Canada on Electromagnetic Fields and Electrosensitivity

Electromagnetic Fields Likely to Cause Alzheimer's in Electrosensitive Persons

Dr. Belpomme, President of ARTAC (Association for Research on Treatment Against Cancer) is asked by the interviewer about his creation nearly three years ago of the European Cancer and Environment Research Institute (ECERI).  The Institute collaborates with 15-20 European teams researching the environmental causes of not only cancer but also other diseases and disorders, including Alzheimer's and autism.


According to Dr. Dominique Belpomme, 80-90% of cancers are linked to the environment. Living was not always “carcinogenic”. Cancer is a recent disease due to the fact that it has become a scourge of huge proportions. Cancer as well as obesity and type 2 diabetes have exploded. We are obliged to ask why. The answer is: life style and pollution:  chemical pollution, pesticides, electromagnetic fields (EMF) produced by wireless technology. Do we continue this technology for purely economic reasons or do we take into account the very high health costs that we will be paying as a result?

"In February 2013 CSIRO scientist Dr David McDonald was awarded compensation for his ill health through a decision in the Australian Federal Court's Administrative Appeals Tribunal (AAAT). His electrosensitivity was worsened as a result of exposure to Wi-Fi and computer work in his office. Now Dr. McDonald has spoken out about his electrosensitivity in this YouTube video (13 mins)."